In the just published 2014 OFAC (*) Civil Penalties Information Chart four out of the ten companies who settled  with the US authorities since January 2014 for alleged breaches of US trade sanctions are non-US companies. Three of them are EU companies.

Whereas the number of OFAC enforcement actions per year has been declining in the last decade, the financial amounts involved per year have been rising. Even though the biggest fines or settlements have usually been with financial institutions, other sectors, and both large and small companies as well as private individuals can and do get hit by US measures.

Non-US based  companies and persons should thus keep in mind that even though they may be based outside of the US, carrying out certain activities outside of the US with non US entities, the US authorities  may still consider that their activities are subject to US (extraterritorial) jurisdiction and must thus comply with US trade sanctions measures.

At the same time, non-US based  companies should also be aware that compliance with certain US measures may be in breach of their own national anti-boycott or non-discrimination legislation. For more insight on such national measures see also the article “Damned if you do, damned if you don’t. Navigating Conflicting U.S. and Foreign Regulations on Doing Business with Cuba. The EU Perspective”, by John Grayston and Giani Pandey for the American Bar Association’s Section of International Law.

The table below is based on the OFAC data and provides an overview of the cases settled so far in 2014. 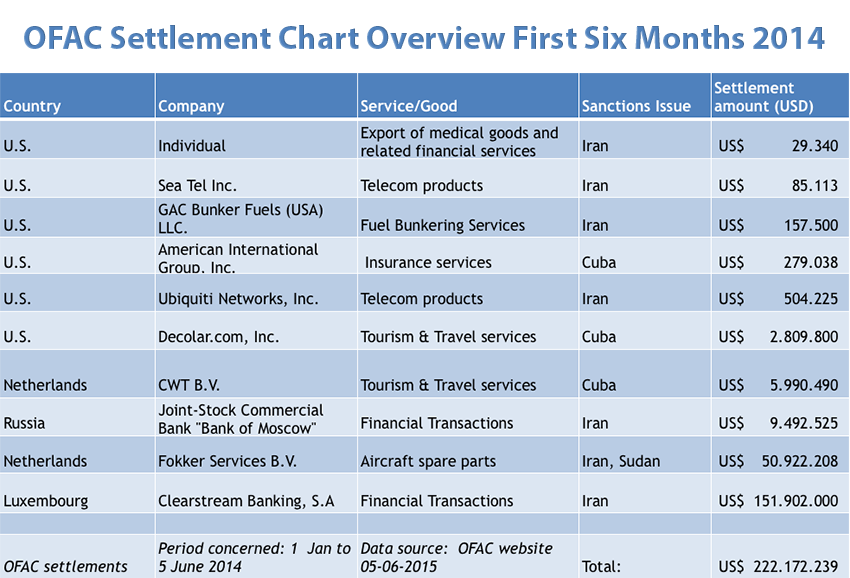